The Journey of Grasshopper 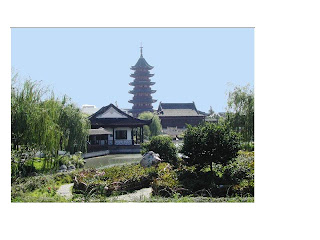 Well, well in Singapore, we are having Elections again. Hurray, not for the election but for the seven hundred dollars our government is giving out : )

Anyway, this reminds me of the infamous Su Zhou Investment of the Past which have left a bitter taste for both Government and the locals here.

‘Jiangnan or Jiang Nan 江南 is a geographic area in China referring to lands immediately to the south of the lower reaches of the Yangtze River, including the southern part of the Yangtze Delta. Several Chinese Dynasties were based in Jiangnan. During the Three Kingdoms period, Jianye (modern-day Nanjing) was the capital of the Kingdom of Wu.

One breezy morning in spring in the year of 1417 Ding You, the rule of Yongle Emperor of Ming Dynasty, Grasshopper and his master visit a rich merchant’s house to do fengshui while touring in Jiangnan.

Grasshopper thinking to himself: ‘Ah, master did not take his Luo Geng (luo-pan/Chinese compass), he must have drank a lot last night and forgot. Well, it’s a good opportunity for me to show master of my inborn talent.’

As they reached the house, the owner, Master Li and his wife was waiting at the door.

Master Li: ‘Welcome Master Dragonfly to Su Zhou and I am thankful to my cousin, Jasmine for troubling you to take a look at my humble abode.’

Master Dragonfly looking around the frontage of the house reply: ‘Oh not at all, not at all….’

Meanwhile after taking out his Lou Geng, Grasshopper with what he thinks an important air was looking at the surroundings of the Mansion and taking measurement of what he thinks is the orientation.

Master Li: ‘The urgency I have seek your help is that things are not that smooth lately for my household and….’

Master Dragonfly interrupting him: ‘Not to worry, let me go into the house first and see what mischief has the little dragons been up to.’

Master Li telling his head servant: ‘Ask them to prepare some nice foods and bring out the Lushan Yunwu (Cloud Fog) tea for Master and his disciple.’

Master Dragonfly looking pleased: ‘Oh that is a very expensive tea that I have long heard about and do not have the fortune to taste it till now.’

Grasshopper who have been standing by and waiting to inform his master of what he thinks is the frontage of the house as he thinks his master must have by now realised that he did not bring his luo geng and wanting to gain credit.

Grasshopper: ‘Master, I have used my luo geng and taken…’

The Master angrily stopped him: ‘Boy that is very rude of you to speak before you are asked to. Do not do it again while I am chatting with Master Li until I tell you!’

Grasshopper puzzled why his master not anxious to know the facing of the house: ‘Yes, yes master, pardon me Master Li.”

As they approached the inner courtyard of the house, Master Dragonfly pointed to the room on the other left of the Dining area which is in the centre.

Dragonfly: ‘Who are sleeping in this room?’

Master Li: ‘Oh that would be my elder son and his wife who have been childless till now.’

Dragonfly: ‘Mmm, last year was a bad year for him and he must have faced some problems with the local gentry.’

Master Li: ‘You are amazing, Master. Indeed the local magistrate has gone after him for filing in false tax returns on his land yields last year.’

Dragonfly: ‘What about the room to the right?’

Master Li: ‘That is the bedroom of my second son and his wife.’

Dragonfly: ‘Well, this is important as you have to pay more attention to his unhealthy nightly life and ask your wife to spend some time with your daughter-in law…’

Master: ‘Oh Master, you are really divine, he have been drinking and whoring and sometimes do not come home at all since Chinese New Year. It have infuriated his father-in law, an influential man here and probably he is the one who instigated the magistrate to pursue the case of my eldest son this year despite after settling the shortfalls and giving expensive gifts last year. I do not know what else will be happening next if this is allowed to carry on.’

By now, Grasshopper was looking with astonishment at his master as he listened to the conversation.

Dragonfly: ‘Okay, let’s take a break first and chatted over tea before I go further as I am old and probably still tired from the long journey from the North so do pardon me.’

Master Li: ‘Sure, I am feeling hungry and thirsty too as I have been up since Dawn.’

Master Li thinking to himself: ‘Mmm, this is no good if he is tired and missed out anything important later. I must ask him to come another day instead. He should be good as he did not have the bazi charts of my family and knows what is happening.’

When Grasshopper saw the food delicacies and the layout on the dining table, he can’t help and let out a gasp of delight as his stomach rumbled. He had not seen such colourful cakes and biscuits of all shapes and the nice sweet aroma in the early morning hour which stimulates his appetite even more. He was glad that he was allowed by his master to sit together with the family for breakfast. He thought that his master must have been pleased to know that he had bought along his Luo Geng and taken the readings of the frontage of the Mansion.

Master Li:’ By the way, Master Dragonfly, I am going to inform the Innkeeper that all your expenses to be billed to my household so that you can relax and do some sightseeing while doing my house feng shui. After breakfast, perhaps my man could bring you to look around and you can come back again when you have enough rest to recommend the necessary changes on my property.’

Dragonfly: ‘Oh that will be nice as I still do feel tired and my backside is sore from sitting in the carriage during the 18 days journey to Su Zhou here. It is very kind of you but I think I will take a rest at the Inn and therefore there is no need to trouble your people.’

After reaching the Inn, Grasshopper couldn’t wait to ask his master as he couldn’t contain his curiosity.

Grasshopper: ‘Master, I was worried when I noticed that you have not carried your Luo Geng with you on reaching there.’

Master: ‘Aha my boy, be direct with me as you thought that I had drank too much last night.’

Grasshopper: ‘Master, does that means that the Luo Geng is not need actually for doing feng shui.’

Master: ‘Today was just to show you how to impress people as the Luo Geng is still needed. It is obvious that the way that this mansion is constructed, a feng shui master must have been engaged before and the result must have been unsatisfactory which the reason why we are here is.’

Grasshopper: ‘Did you use the Yi Jing to divine last night as the owner did not give you their birthdates master?”

Master: ‘In a way, yes however I had observed that at the Si hour, the sun was on my right and that the house must have been facing south. What is the ruling star for this year my boy?”

Grasshopper glad to have a chance to show that he had updated himself once the year had changeover:’Oh Master, it is the Wu Qu star (Modern context: Star 6).’

Master:’ Good, shows that at least you are worth to be a student of mine. So where is the Lu Cun star (Star 3)?”

Grasshopper: ‘It is at the South West Sector, Master’

Master: ‘What about last year then?”

Grasshopper: ‘Oh yes, the eldest son room is at the West sector and the Zuo Fu star(Star 9) star was there last year. That is brilliant, master and they must have been very impressed.’

Master: ‘Yes, my boy unfortunately in the real world, ignorant people like to see stuffs that are like magic to be convinced…..”