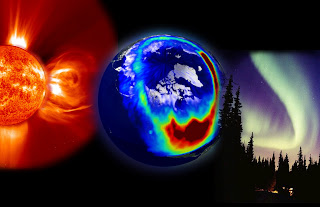 From my Spacebook friend, Aloke:

'Earth is the still beating heart of space. Space is alive. Space is the boundless, three-dimensional extent in which objects and events occur and have relative position and direction. Physical space is often conceived in three linear dimensions, although modern physicists usually consider it, with time, to be part of the boundless four-dimensional continuum known as space time. There is still so little known about outer space by modern science, but of that little we do know there are some extraordinarily amazing things.

Consequently, the earth is slowing in rotation by about 0.002 seconds per day per century. Scientists do not know how the moon was created, but the generally accepted theory suggests that a large Mars sized object hit the earth causing the Moon to splinter off. The light hitting the earth right now is 30 thousand years old. The energy in the sunlight we see today started out in the core of the Sun 30,000 years ago – it spent most of this time passing through the dense atoms that make the sun and just 8 minutes to reach us once it had left the Sun! The temperature at the core of the sun is 13,600,000 kelvins (unit of measurement for temperature). All of the energy produced by fusion in the core must travel through many successive layers to the solar photosphere before it escapes into space as sunlight or kinetic energy of particles.

If two pieces of metal touch in space, they become permanently stuck together. This may sound unbelievable, but it is true. Two pieces of metal without any coating on them will form in to one piece in the vacuum of space. This doesn’t happen on earth because the atmosphere puts a layer of oxidized material between the surfaces. This might seem like it would be a big problem on the space station but as most tools used there have come from earth, they are already coated with material. In fact, the only evidence of this seen so far has been in experiments designed to provoke the reaction. This process is called cold welding. Space Facts: - The Earth gets 100 tons heavier every day due to falling space dust. - Venus is the only planet that rotates clockwise. - Sound doesn't travel in space.

The volume of the Earth's moon is the same as the volume of the Pacific Ocean. - The temperature of the earth's interior increases by 1 degree every 60 feet down. - The sun is 330,330 times larger than the earth! - The Earth weighs around 5,940 billion metric tons. - The earth travels through space at 660,000 miles per hour. - The Earth gets 100 tons heavier every day due to falling space dust. - More than 20 million meteoroids enter Earth's atmosphere every day.'

Grasshopper: 'Master, I don't understand by what that Korean Feng Shui master Cho is saying by the Eight Mansion Theory is a conspiracy by the Late Tang Dynasty Emperor to weaken his country?'

Master: 'Were you around at that time or did you witness it, boy?'

Grasshopper: 'Of course not but master, while having tea with the other school's disciples who are laughing and joking about it yesterday, it sounds quite true from the contradictions it have with Time as it emphasis mainly on Space.'

Master: 'What if Time is the other missing part for some reasons or others from the original text and you will to add it in?'

Grasshopper: 'But then, Master, it still does not sound right as the so called eight wandering stars are classified as auspicious and inauspicious meaning some stars are still bad though the time might be right for the bad stars in the correct place. And then you only have 2 category of Life  Essence-East or West, it is so funny and do not make sense as it means if you are East, you can only live in a East type of house and so forth.'

Master: 'Would it not be same for our 滴天髓 Di Tian Sui which categorises people generally into 10 types of characters?'

Grasshopper: 'Not really master, as in Di Tian Sui, we still have to look into the seasons of birth and many other things...'

Master: 'Precisely, as what you have seen and heard about Eight Mansion Theory would be the same with the missing parts. All-right, I will explain to you what really happens from what I know from our late grandmaster another time, its time for dinner...'

Grasshopper thinking to himself: 'Arrrgh, no wonder Master always says 'Eat 3/4 full only as it is good to still feel hungry after a nice meal and being energetic instead of being sleepy...'

Dear friends, my apologies as I have been busy lately and too tired to do any posting, thanks for being around if you happen to be here.