Yap, yap, nobody likes to grow old except kids. Well, got some inspirations from the above aerobic exercise. Give it a try, its good for your bones. Who says Guys can't learn aerobic.I have got tired of the potato sacks exercise : )

Let' see if my inspiration is back as I try to blog as I've been getting bored lately, nothing to do with the Soccer World Cup. 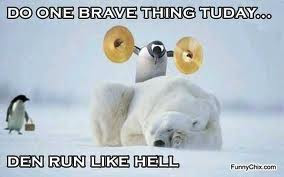 A man drives to a gas station and has his tank filled up. The gas attendant spots two penguins sitting in the back seat of the car.

He asks the driver, "What's up with the penguins in the back seat?"

The man in the car says "I found them. I asked myself what to do with them, but I haven't had a clue."

The clerk ponders a bit then says, "You should take them to the zoo."

"Hey, that's a good idea," says the man in the car and drives away.

The next day the man with the car is back at the same gas station. The clerk sees the penguins are still in the back seat of the car.

"Hey, they're still here! I thought you were going to take them to the zoo."

Still can't get the inspiration, another story.

An unemployed man goes to apply for a job with Microsoft as a janitor. The manager there arranges for him to take an aptitude test (Section: Floors, sweeping and cleaning).

After the test, the manager says, "You will be employed at minimum wage, $5.15 an hour. Let me have your e-mail address, so that I can send you a form to complete and tell you where to report for work on your first day."

Taken aback, the man protests that he has neither a computer nor an e-mail address. To this the Microsoft manager replies, "Well then, that means that you virtually don't exist and can therefore hardly expect to be employed."

Stunned, the man leaves. Not knowing where to turn and having only $10 in his wallet, he decides to buy a 25 LB flat of tomatoes at the supermarket.

Within less than 2 hours, he sells all the tomatoes individually at 100% profit. Repeating the process several times more that day,he ends up with almost $100 before going to sleep that night.

And thus it dawns on him that he could quite easily make a living selling tomatoes. Getting up early every day and going to bed late, he multiplies his profits quickly.

After a short time he acquires a cart to transport several dozen boxes of tomatoes, only to have to trade it in again so that he can buy a pickup truck to support his expanding business. By the end of the second year, he is the owner of a fleet of pickup trucks and manages a staff of a hundred former unemployed people, all selling tomatoes.

Planning for the future of his wife and children, he decides to buy some life insurance. Consulting with an insurance adviser, he picks an insurance plan to fit his new circumstances. At the end of the telephone conversation, the adviser asks him for his e-mail address in order to send the final documents electronically.

When the man replies that he has no e-mail, the adviser is stunned, "What! You don't have e-mail? How on earth have you managed to amass such wealth without the Internet, e-mail and e-commerce? Just imagine where you would be now, if only you had been connected to the Internet from the very start!"

After a moment of thought, the tomato millionaire replied, "Why, of course! I would be a floor cleaner at Microsoft!"