Must have been watching Avatar again last nite when I could'nt sleep, thought I would write about it after receiving an email. 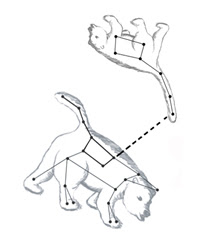 Our Planet Earth is Millions of years old but there is no doubt that Civilisations of Man begins only a few thousands of years ago. How come? Did the Ancient Chinese or the one who came up with this He Tu and Lo Shu Square knew that the Earth was round but had no way of explaining it to the then backward people at that times. How come the Hexgrams in the I Ching can coincidentally be remarkably similar to the recent Binary System for Computer. If only Bill Gates was born in China at that time, could he have a made a difference for the New World to progress faster or would he have the same problem explaining his concept and end up coming out with a River Horse or whatever it is, ha-ha....

For the Ancient Chinese metaphysics, 5 is a number whose function is to neutralise and unify which cames from yang number and ying number of 1 + 4 and 2 +3. 5 implies establishment. 10 is a number with the implications of stopping or
decreasing the full growth of ying and yang. All numbers contain Zero and One. The establishing number is the number one and that which is established is zero. Thus the number 5 is an establishment which can be expressed by zero and contains the possibility of going up or down the scale. 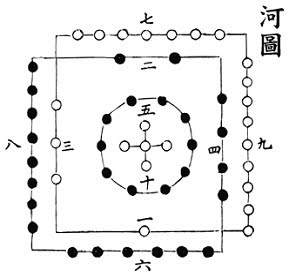 The number One or that one white dot in the He Tu Chart is Heaven and position at the North of the bottom of the chart is taken from the Pole star , meets 5 and gives Six which then combines into Water (The Little Bear, Ursa Minor consists of Polaris star and six stars).

The Two is Earth at the South and meet 5 and gives Seven which then combines to Fire . (Five known planets at that time, Saturn, the Central planet, Jupiter represent the East, Mercury the North, Venus the West and Mars the South and the Sun and the Moon gives you the Seven). The polaris group (Heaven) and the solar system (Earth) at that time with the known 5 planets which in San He fengshui represent the 5 elements which you can see on traditional San He Luopan rings. Obviously the Chinese knew about Orbiting Clockwise and Anti Clockwise. If you don't know what I' m talking about, you are way far behind them a few thousand years ago, ha-ha, just kidding. By the way, what does gravity got to do with magnetism?

Then you have Early Heaven Fire at the East representing the Sun and Early Heaven Water at the West. The Sun rises in the East and the Moon rises in the West (The Ancient Chinese felt the Moon represent Water as its gravity affects the tides). The Three then meets 5 and gives 8 which then combines into Wood. The Four at the West meets 5 and gives 9 which then combines into Metal.

The 4 Xiang of the numbers 1, 2, 3, 4 refers to the interactions between the Polaris group of stars with the four groups of 28 constellations of stars governing the North, East, South and West with the ancient chinese thought of the then Solar system and also the interactions between the Sun and Moon and Earth which then gives birth to the four seasons of the four Elemental Qi . The chinese He 河 meaning the river literally also means Sky River and Tu图 Map also refers to the Earth and together they refers to the intearctions between the Stars in Heaven and Earth, or a map found on the back of an mysterious animal.(probably an alien robot R2-D2 from Stars Wars, ha-ha, just kidding). Coincidentally, from wilkipedia:

There is no doubt that the He Tu refers to the mapping of the energies from the Heavens,


The meaning of the Four Xiang in the Yi Jing:

By adding a yin line or yang line to the four forces, the Eight Trigrams are then established.

Arggh, I had thought of no metaphysics at the moment until I had received an email from a : )

Dedicated to Laphard and Mulberry from 5 Arts Forum. I would be busy from now on as I have been invited by my Mentor to participate in his Four pillars section in his Forum at Singapore Fengshui Centre. Can't be at two places at one time, ok? Forgot to let you all know, don't bother to email me at my old yahoo account. it is SPAMED, must have been the fault of that article titled 'The Internet' I posted the last time, well, I deserved it, ha-ha..