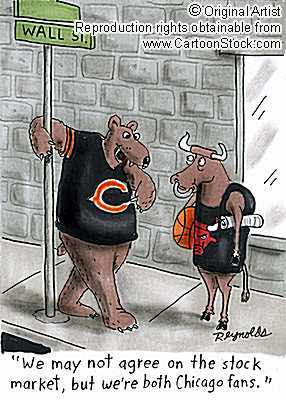 How the government system works.

In an effort to determine the top crime fighting agency in the country, the president narrowed the field to three finalist, the CIA, the FBI, and the Chicago Police.

The three remaining contenders were given the task of catching a rabbit which was released into a forest.

The CIA went into a forest. They placed animal informants throughout. They questioned all plant and mineral witnesses. After three months of extensive investigation they concluded that rabbits do not exist.

The FBI then went into the forest. After two weeks without a capture, they burned the forest killing everything in it, including the rabbit. They made no apologies. The rabbit deserved it.

A rabbit was then released into another forest. The CPD went into the forest. They came out two hours later with a badly beaten bear. The bear was yelling "Okay, Okay, I'm a rabbit, I'm a rabbit". 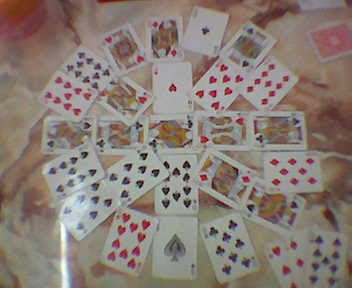 Ah, to carry on with the Yi Jing.

Two month or so ago, I got a MMS picture of a Yi Jing card reading from a client of mine shown in the picture above. The card in the centre is the subject. Normally for Asian countries with Chinese community places, you would sometimes find the odd stall with a table and stool with a umbrella occupied by a so called fortune teller using poker card for divinations. Most of the time, it is based on the Yi Jing and some would have a Chinese deity on the table for inspiration.

My this client, boy, was in a fluster over the reading. And I don’t find it unusual.
Accordingly, as it showed a black club of queen in the centre, it means bad events would be happening to the person involved which in this case is the mother who will meet with a disaster last month. The last divination I did with this method had also a similar card and subsequently, the client had passed away with cancer relapse..

I, of course, can’t panic, right? We are seasoned practitioners set to find out causes and effects, can’t afford to.

Don’t bother with the rest of the cards which was for fine-tuning the readings as it would be too complicated to explain. However, for those interested, be patient as I’ m seeking approval from my mentor, Mr. Vincent Koh of Singapore Fengshui Centre to access his chat room to share this not so ancient art of fortune telling (poker cards was invented a few hundred years ago only, right) for the kind and right people who helps out with giving advice, though right or wrong on the Internet. Not promoting his website but I had an obligations to Yi Jing to share and promote this knowledge for free and I can’t think of a more suitable site which I can use for free.

I, of course, was surprised as I have the mother’s bazi though the hour pillar was not given. And I also have the daughter’s birth chart and I can’t see anything amiss. I did know that the mother have diabetes and it don’t kill if under proper medication and diet. I then, to play safe (local slang) ask the Yi Jing. It showed a card of the Ace of heart. It put a smile on my face at the answer as not only that it’s an auspicious card but she was my ex-girlfriend and who have been promoting me to all her Malaysian friends and which I have put a stop to lately.. The Yi Jing was telling me ‘Ah, this person is related to you right? Don’t worry.’ This card also represents Man and Woman relationship.

I was then puzzled as the poker card readings for divination is always right regardless of the expertise of the one doing it. How did the queen of club come about in the first divination? On further inquiry into the health of the mother, it turns out that the subject also has mental delusions which can leads to accidents or committing suicide. I then check out the house fengshui which I have audited before, I only then realized that the mother gua was 9 and her house chart have mountain star 9 in the south and with the annual star 5 this year in that sector, it create a mental problem with 9 enhancing 5. However, cure has already been implemented early this year. I then realized coincidentally that she, at that time, have bought another property which she was shifting in the following month and of course, would have change the destiny. The Yi Jing is telling me, ‘Ah, so do you understand now?’ Ha-ha, do you? Well, I leave it to you to decide.

To conclude, an understanding and the right attitude of usage of the Yi Jing in pursuit of Metaphysics would be enhanced with triple speed for a normal student and I stand by this quote. Even if you don’t agreed, ha-ha……