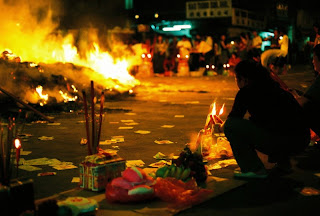 Woh, time passes fast and it is the Seventh Month of the Ghost Festival again, above is a picture of people making all kind of offerings at night to the Ghosts on a street during their annual holidays on Earth for this month. Keeping with the spirits of the festival, let me tell you a Hong Kong ghost story involving a Blind Man fortune teller. There are many versions and the one I like best was this one retold by a popular ZWDS Master Yang and I had made some adaption from other similar stories to it. So here we go,

'In the Fifties in Hong Kong, Scuba Diving was not that popular when it just started as equipments were very expensive, only the super rich can afford it. There was this young man from a reputable family who was crazy about anything to do with the sea and he particularly loves it. He happens to be the only son of this wealthy family and of course, his parents were concerned as there is a Chinese sayings that the chances of meeting danger in the sea is high normally for a sole descendant. However, they have no way of stopping him apart from telling him to be careful as knowing his unrestrainable character . The son to keep the parents from worrying too much went for qualified life guard course and was trained in CPR or resuscitation apart from being a good swimmer. As such, the parents are more at ease, taking comfort that all precautions have been taken.

Now lets call this young guy Ah Qiang, who happened to have a sweetheart named Xiao Mei from his schooldays however Xiao Mei do not like the sea and so do not join him on his weekly routine of boating around the little islands off Hong Kong. Apart from this hobby, most of the rest of the time Ah Qiang have were spent with Xiao Mei as both were very much in love. The parents were happy to see this and were hoping that they will get married early and they can then have additional family members to carry on the family line.

Ironically, when the parents were in the midst of discussing of how to get the couple to settle down early, when one weekend after returning from his scuba diving trip, Ah Qiang came back, pale faced and went straight to bed without taking his supper or bath. The parents were surprised and thought that he probably had too much fun and was tired. However, the next day, they found that he was running a high fever and was delirious and making unintelligible sounds. The House doctor that came then diagnoses that he was just running a high fever. Ah Qiang then recovered after a few days but however, started to behave strangely.

After that incident, Ah Qiang was no longer so loving to Xiao Mei and most of the time, appeared to be lost in his own thoughts. Xiao Mei in an attempt to strengthen their relationship decided to spend more time with him and thus at times, stay overnight with him at his house. Strangely, when Xiao Mei wake up in the morning, she will find faint finger marks on her cheek which looks like a slap and Ah Qiang will then fall sick for the next few days before recovering. This carried on for weeks and did not escape the notice of Ah Qiang's father who believes in Feng Shui and believes something must have happened during that diving trip and decided to seek advices (this was the Age 5 for flying stars school of feng shui). He had then asked his Feng Shui Master to recheck the house for problems and it was discovered that Ah Qiang was sleeping in a Gen Gua(North East) room and the annual star 4 was in that sector for that year. The Bedroom door was at the Kun Gua (South West) sector. It was then decided to shift Ah Qiang to another bedroom but however again after weeks, Ah Qiang shows no signs of improvement and still behaves strangely. Somebody then suggested that Ah Qiang's father to check his son bazi chart (birth astrology) to find out what is the problem.

A friend then recommended a famous bazi expert in Kowloon which the father went but was disappointed as the master could not offer a valid explanation. He then went to a spiritual master who told him that the solution was to get his son married to clash away the bad luck which he agreeds.

Ah Qiang 's parents then met up with Xiao Mei and her parents to discuss about the marriage proposal for Ah Qiang. Xiao Mei's parent have no objections and agreed to it as they have been wanting to see their daughter married rather than cohabiting which they have been uncomfortable with.

After the wedding date was fixed and the announcement was then made to all their relatives and preparations were made for the big day, Ah Qiang immediately fall sick seriously. Doctors were unable to find the cause and decided to have him warded in a hospital instead so that they can monitor his conditions and find out more. However, Ah Qiang's conditions got worse each day and he grows thinner. When asked about it by the parents, the doctors could only shook their heads and told them to bring their son back home as they could not do anything about it.

By now, the parents were worried and desperate and Ah Qiang's nanny then suggested that they seek the help of a Blind Man master called Zheng Mang Gong 鄭盲公. Here the word Mang Gong  盲公 refers to Blind Duke as the analysis uses the Yi Jing by Wen Wang, a Duke from the Shang Dynasty. Interestingly, in Hong Kong at that time, these Mang Gong or Blind Duke were suspected to keep a ghost child as their analysis were very accurate and they will able to foretells a lot of things that a normal fortune teller was unable to. Some says that these group of people have the 'Third Eye' and therefore able to see a lot of things in the future and past. It was not a surprise to visit one and have the master tell you your surname, and the number of siblings you have and whether your parents are still around or not accurately without giving your date of birth.

An appointment was then made with Zheng Mang Gong by the Nanny who was from his same village in China as this master would only divine for people related to him. On that day the master appeared unwilling to meet him, and despite being told to come another time, Ah Qiang' s father persisted by insisting that he had an appointment and after half a day, finally get to see the master. The master without saying much, starts to shake an old turtle shell with apparently some coins in it and then toss it out. After several similar actions, the master finally stopped and lit a cigarette followed by sipping the tea. He then says: 'A female ghost is in love with your son!'.

Ah Qiang's father was astonished as he have not even told him about the purpose of his visit. However he was shocked and stood up and says: 'I don't get what you means?'

The Master then took another sip of his tea and blew a ring of smoke from the cigarette and then said: 'Your son had kissed the corpse of a young girl causing that girl ghost to fall in love with him. The ghost had since then followed him everywhere and then you all had provoked her by arranging a marriage for your son and it looks like she wants his life so that they can be together forever.'

Ah Qiang's father thought for a while and says :' I don't understand why my son would want to go and kiss a girl corpse...'

The Master: 'It is wrong by thinking that arranging an early marriage would clash away his bad luck, I would suggested that you cancelled the wedding tempoary until you can find a solution to appease the girl ghost and keep your son safe for time being.'

Commentary: The above is an analysis based on the six lines of the hexagram called Liu Yao Yi Gua or Wen Wang Ba Gua. Here there are six Earthly branchs of Zi, Chou, Yin, etc attached to each line and there are six celestial animals attached to it. Just this hexagram alone contains Eight trigrams. E.g. The Lower trigram which is Dui Gua can represent a young woman or an open mouth. The Snake also represent ying spiritual energy.

Ah Qiang's father: 'Will you be able to find a permanent solution to this problem?'

The Master: 'For my solution to works, you need to have belief in me to take certain actions. So please go and check from your son or his friends whether what I have said is true as you still appears to be skeptical of what I have said.'

To be continued, have a great week.