Pollutions of the Minds 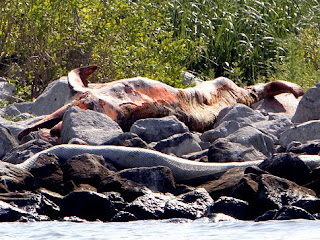 A MESSAGE FROM A DEAD DOLPHIN

Taken from the above link.

'BP has quartered off the coast like its guarding a war zone. The company chased a CBS news crew from a beach in South Pass, Louisiana when they tried to film a thick coat of oil, and CEO Tony “I just want my life back” Hayward famously barked orders at a cameraman as if he was a visiting king walking among peasants.'

About gambling for the Football World Cup, let me talk about it later. While we are living our normal life and having fun, let's focus on another event in the World today though it is the start of this soccer event that takes place once in every four years. The above link is referring to a major disaster that is happening in the world now with the consequences that will be affecting the Planet Earth' s Marine Life for years to come. I am not going to engage in any senseless debate but I was amused that the British Media had shifted the focus to Mr. Obama for highlighting the problems which caused a bad image for British Businessman in America. Hey, come on, that stupid leak have been around for such a long time that you can't PLUG IT? You mean with the Millions you have been making all these years digging holes, you have not bother with the risks or putting reinvestments back into R & R to take measures if this scenario or in this sad case have happens? Secondly, why can't you Media highlight this LEAKING problem instead of changing the focus to a more materialistic issue so that Maybe Superman will hear about it and comes to the rescue or give his suggestions on how to PLUG this problem.

Phew, at least I' ve blown my mind, ha-ha. Okay, for those of you or who have friends or spouse who have been itching to place bets on this World sporting event, its okay as long you don't intend to be a Millionaire after the World Cup ends. If you are thinking of making some money out of it through betting with your hard-earned money, forget it. There should be better ways to make money from other things and maybe at the most, you just waste your time instead of MONEY. My advice, if you have some money to throw, that's okay, then put your bets on your favorite team to be the World Champion and if you don't make any money, doesn't matter as you have fun watching your opponent clobber your team at least. Ha-ha, Me EVIL!

Or Maybe, you can find out where David Beckham's Son is schooling and sent your son there if you have one and maybe your son can be a millionaire and you can live in comforts for the rest of your life. Just a suggestion....

You know as I have said before, I was invited to do an audit for a casino in a third world country which I have rejected while having Lunch with the owner, a conversation:

Mr. Casino Owner: 'Ah, Its okay as you feel you are not up to this level to handle this project.."

Me: 'Just curious, Mr. X, What do you think about all this fortune seekers, after all this years running this business?'

Mr. X: 'Oh I am amazed how the Human Greed could affect Rational thinking, they comes all the way here and exchange their hard-earned cash for plastic chips so that when they wins, they feel too lazy (giving themselves a reason) not to change it back to cash hoping to win more by carrying on. Its only when they have lost everything, then they wake up, ha-ha.'

Mr.X : 'Hey, don't tell me that you intended to change occupation to being a reporter?'