Ah, its again Sunday in Singapore, reminds me of Sunfowers so for today, lets look at colours as it is associated with New Age Fengshui. Does colours helps in improving the Fengshui of a property?

Before we go further, lets look at an artist where colours played an important part in his life, the darks colours in his dark moments and when the bright colours in his arts enriches his life. Ha-ha, no pun intended. 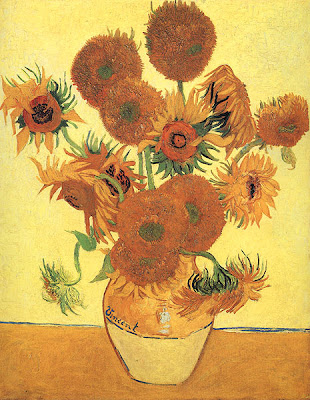 'Vincent Willem van Gogh[pronunciation 1] (30 March 1853 – 29 July 1890) was a Dutch Post-Impressionist painter whose work had a far-reaching influence on 20th century art for its vivid colors and emotional impact. He suffered from anxiety and increasingly frequent bouts of mental illness throughout his life, and died largely unknown, at the age of 37, from a self-inflicted gunshot wound.

On March 31, 1987, even those without interest in art were made aware of van Gogh's Sunflowers series when Japanese insurance magnate Yasuo Goto paid the equivalent of US $39,921,750 for Van Gogh's Still Life: Vase with Fifteen Sunflowers at auction at Christie's London, at the time a record-setting amount for a work of art.[14] The price was over four times the previous record of about $12 million paid for Andrea Mantegna's Adoration of the Magi in 1985. The record was broken a few months later with the purchase of another Van Gogh, Irises, by Alan Bond for $53.9 million at Sotheby's, New York on November 11, 1987.'

Now that's pretty a lot of money for colours, as for fengshui, you decided, ha-ha..
A tip: what you see as plain light comes out with rainbow colours when it goes through a prism.

To be frank, most of the traditional fengshui masters that I have engaged so far believes that colours only plays a part of 10% in improving Fengshui. Yes, I do engaged fengshui masters to do audit for my client or for my own property to learn more as they are not on their guard when explaining to me their fengshui techniques to me. But then not all masters are that generous or open mind. Of course, it helps that I' m keeping a hidden profile in the metaphysics world, an advantage. The latest was a liu fa master that I had engaged for a confusing 4th storey apartment with misleading facades.

I had already establish the facing of the apartment with acid test on the history of the client staying there. He gave the correct facing as the one I have established, very impressive to me as it had taken me a longer time to work it out. However in Liu Fa Fengshui, he uses the True North and end up with the sitting position at 45 degrees compared to the one I have for San Yuan Flying star at 5 degrees. Hmm, did the Earth movement deviates so much on its axis over these millenniums.

Interestingly, he do not support the use of fengshui cures such a string of six coins as he said that what we have now comes from mass productions from factory. Neither does Pi-xiu or Qi-lin, etc... Thought I had caught him when he proposes putting a Elephant or a Round Metal Ball at the North-West Sector.

Putting on a innocent look, I ask him: ' I thought you say fengshui ornaments is of not much use?'

He was then forced to explain: ' It is for Gua imagery from the Yi Jing if you know what I means....'.

Me:' Why put it here?' (Of course, I can't be too specific on why it is the North West Sector as I am just a clueless client).

Liu Fa Master: 'Well, this sector is rather weak and therefore have to be strengthened.'

LF Master: ' Anyway, your apartment have the wealth sector missing.'(refering to the missing corner His South East for the apartment)

Now in Liu Fa Fengshui, they uses the True North and they have a different method of working out the wealth sector unlike Flying Stars Schools. This missing wealth sector happen to have star 2 and 5 combination for flying star chart of the apartment. Anyway, after going through a few other cures of closing this area and opening up that area, Liu Fa techniques, he then told me to put three plants at my East sector (To him, that is South East) without telling me why. Do you know why? Ha-ha....you are not paying attention to my post if you don't.

Yawn, it sure is a lazy warm Sunday afternoon, let me have a break to enjoy it with a nice cold beer and some music before I come BACK.

Yap, I' m back. Now to carry on, water was prohibited in one of the bathroom smack in the centre of the apartment. Why? No explaination given. Guess he must be referring to Heaven's Heart. Interestingly, a washing machine is allowed there so I guess activity is allowed at the centre or Heaven's Heart. For the washing machine allowed there, try to figure it yourself, you will get it as I have already given you the clue on activity. Looks like the bathroom will have to be recycled into something else, ha-ha....

Next, some areas closed off interestingly is because of sha qi from outside. Happens to have a playground in front with three lamp post looking directly in. A bedroom was also closed off because it faces a 'Wind Gap' Sha activated by a train going by every 20 minutes interval on a rail on the same facing. Guess sound sha from vibration will be involved though sound travel slower than light, ha-ha...

Bedboard position at North West(San Yuan West). And finally yes, date picking for renovation works as the kitchen sink in the NE sector have to be relocated as water not allowed. ??? In Liu Fa, North East is the Ling Shen or Golden Dragon for trigram Zhen (Early Heaven) but this apartment happens to sit on NE.(this is based on True North Demarcations), in other words, as in Flying stars, reverse dragon or water dragon climb up to mountain. Interestingly, the mountain dragon could'nt drown as fortunately there is a 'Mountain' at the front facing. So I guess when he made the statement, 'Water not favorable for the house', might as well maximise Health. Ah, yes, date picking and recommended action to activate auspiciousness, knocking or drilling a must at the South East (San Yuan : East). Ooops, based on San Yuan or Magnetic East, Knocking on San Sha? Pretty confusing with True North involved.

Ha-ha, how? Hmm, will be back another time. The keyboard is getting to be a pain when I uses the laptop. Too lazy to unpack my desktop with its chinese software since last year, yawnnnnn...

P.S. Colours also given 10% influence by this master.