A traveler became lost in the Sahara desert. Realizing his only chance for survival was to find civilization, he began walking. Time passed, and he became thirsty. More time passed, and he began feeling faint. He was on the verge of passing out when he spied a tent about 500 meters in front of him. Barely conscious, he reached the tent and called out, "Water...".

A bedouin appeared in the tent door and replied sympathetically, "I am sorry, sir, but I have no water. However, would you like to buy a tie?" With this, he brandished a collection of exquisite silken neckwear.

"Well, sir," replied the bedouin, "If you really need water, there is a tent about two kilometers south of here where you can get some."

Without knowing how, the man summoned sufficient strength to drag his parched body the distance to the second tent. With his last ounce of strength he tugged at the door of the tent and collapsed.

Another bedouin, dressed in a costly tuxedo, appeared at the door and enquired, "May I help you sir?" 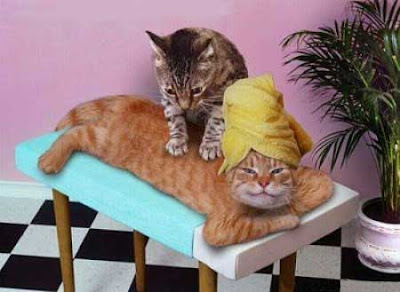 Ah, today personal time and thoughts on my blog. Feel like lazing around. For any metaphysics stuffs, please go to my links for my latest posting.

Finally, found the original sound track of ‘Pieces of April’ by Three Dog Night for the movie ‘Notebook’ posted by a kind user in You Tube. Yippee yippe yeah! Guess I have to match the Ying and Yang by playing both MTV though it isn’t that great as I can’t find the original Movie that it came with when I first come across it.. No offence, anyway thanks, You Tube. Somehow, the previous MTV I had posted in my blog last year gives some kind of kicks and inspirations when I’ m feeling lethargic. Looking at what Mankind have which the Beast do not have.

The lyrics of the song by the original composer and singer, Loggins.

'April gave us springtime and the promise of the flowers
And the feeling that we both shared and the love that we called ours
We knew no time for sadness, that's a road we each had crossed
We were living a time meant for us, and even when it would rain
we would laugh it off.

We stood on the crest of summer, beneath an oak that blossomed green
Feeling as I did in April, not really knowing what it means
But it must be then that you stand beside me now to make me feel this way
Just as I did in April, but it's a morning in May.

But I really prefer the song sung by Three Dog Night to go with the movie, no offence.

Found the original video by one kind soul, candleritz, hee-hee....