Happy Tiger Year, ha-ha, oops its Chinese I mean, not the one lost in the woods, ha-ha....I know, I know, its still early.... And its on surprise! Valentine Day. 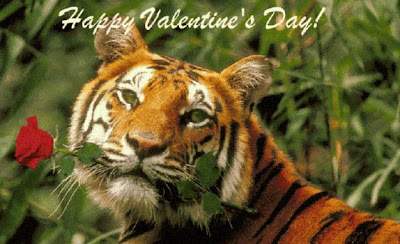 To continue with the Tiger lost in the Woods,

-- At a cocktail party, one woman said to another, Aren't you wearing your wedding ring on the wrong finger?" Yes, I am. I married the wrong man."

-- A lady inserted an 'ad' in the classifieds: "Husband Wanted". Next day she received a hundred letters. They all said the same thing: "You can have mine."

-- When a woman steals your husband, there is no better revenge than to let her keep him.

-- A little boy asked his father, "Daddy, how much does it cost to get married?" Father replied, "I don't know son, I'm still paying."

-- Young son: "Is it true Dad, that in some parts of Africa a man doesn't know his wife until he marries her?" Dad: "That happens in every country, son."

-- Just think, if it weren't for marriage, men would go through life thinking they had no faults at all.

Anyway, to carried on with Bazi

There is a posting by Devadog in my mentor forum at Singapore Fengshui Centre which bought to mind about the last time I said I would talk about the in-tomb stuff for earth element. Well here I am after being reminded : ). In his post, the chart belong to a Bing Fire Daymaster.

I have taken the liberty to put the chart here, ha-ha, hope you dun mind, Robert from New York.

Now to a Bing Daymaster, this Ox year which have not ended yet until Chinese New Year, Chou or Ox in Shen Sha or Angels and Demons in Bazi is refer to as the Dragon Virtue Star if Angel and Lonesome Star if Demon.The Chou as a symbolic star is based on having the Yin or Tiger in the Bazi Chart and coincidentally the Yin Ying Wood is in the Spouse Palace. Part definition of Lonesome Star:

'This unfavourable star may mean unfortunate events which may happen to his or her family making him or her lonely. A male person meeting the star will miss the spouse and vice versa. A woman with this star appearing on weak spouse star, marriage will not be lasting. Lonesome star on Heaven Void Star- Poverty at young age.' Taken from GM Koh 'Advanced Bazi Course.'

In the Chart, the Bing Daymaster meets this star during the Ox year and accordingly, the boyfriend was hospitalised during this time. Why it is named the Lonesome Star for Shen Sha in Bazi? Now all of you know that for a Bing Fire Master for female, the Zheng Guan or Proper Authority or Husband star is Gui Water which is stored in the Chou, Earth element. And if this Chou if it is in the Chart i.e. replacing the Wu or Horse month pillar, and meet Heavenly Stem Gui or Ren in the annual piilar or Tai Sui or in the Ten Year Luck Pillar,, it would mean the Husband star going into Tomb. And thus aptly, it is named the lonesome star in my personal opinion, subject to any objections of course, ha-ha..

There many opposition parties on the internet, you know for metaphysics.

Got to go, have an appointment, will carry on with this posting later.

As to whether it is a useful star or not will also depend on whether Chou is a favorable element. Anyway, Chou have a conflicted clash with the Wu Ying Fire, Earthly Branch in the Chart and to what that will work out to, I' ll let you find out soon from the Ongoing topic in the forum.

I'm Back. Can't wait to grill the Kurobuta Pork Chops that I have brought from the Japanese SuperMarket to try out the new recipe my Japanese Chef friend have given me for marinating, I' m not starting a cooking class or food connoisseur colum, ha-ha. You should be glad as I m waiting for two hours for the marinade to be absorbed by the meat before grilling. Bought a packet of Salmon Belly Sashimi to go along with a bottle of sake to give inspiration as I carry on blogging. Hey Man, I need to yak about myself sometime once in a while, right? Anyway, paid S$28 for this Kurobuta Pork Chop at a coffee shop in Holland Drive in this picture.

My, my, she sure is sexual. Part of the description 'You were great that night, I couldn’t help gaping at your assets; they were huge. I carefully took a small nibble to start our foreplay, I moved downwards and craved for more, I took bigger bites; it was good, but the thing was, I’m not sure whether that justified the high price I’m paying for.' HA-HA.... 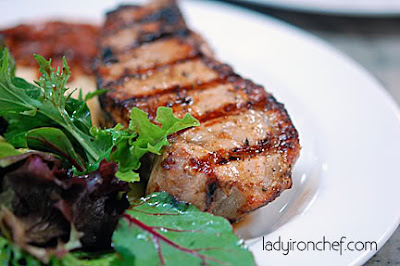 Anyway, try it out as I have never eaten it in a coffee shop and also to see how good it is and decided though it is good, the long trip up down ain't justified as it can be improved. Thought I might as well grill it myself and see if it can be improved though I ain't no cooking genius, let alone fry a proper sunny egg, ha-ha.

Ano,Chotto Sumimasen, leh please excuse for a while before I come BACK. Time to start to grill, ha-ha... 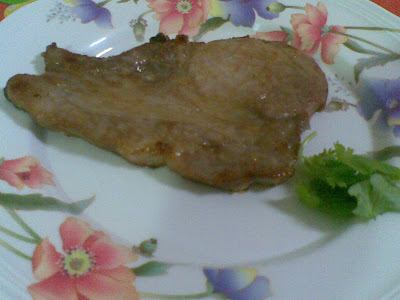 Looks like a normal pork chop, ha-ha. Anyway, enjoys it more. Try one with the normal salt and pepper seasoning, taste like the one I had at Holland Drive. This is better. The so called recipe, miso paste, Japanese soyu sauce, and mirin. When it is almost brown, you then brush both side of the meat with Mayonnaise at the last grilling stage. Mmn, heavenly taste, regret wasting the other piece with the normal seasoning method. Argh.... 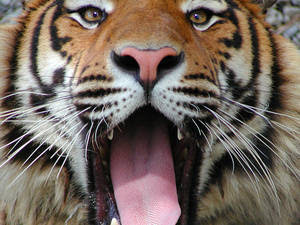 Ha-ha, time for bed to let the stomach digest and enjoy the food. I know, I know, it's not healthy but why care? I live for the moment.

Thanks for keeping me company if you are around. ; )