Well Life is sure strange, I' m sure some of you while as young kids might have met an older person or somebody who got nothing to do with your life and for no rhyme or reason care a lot for you and go out all the way to give you assistance without asking for returns. Let's look at Animals instead tonight, two unlikely companions. Looks like those days are gone in the present mentality, not because of those perverts. Anyway,

A Male Wild Monkey recently adopted a kitten. When this photo was taken, the male monkey attempt to console the unhappy little kitten from the camera which probably looks like a weapon. 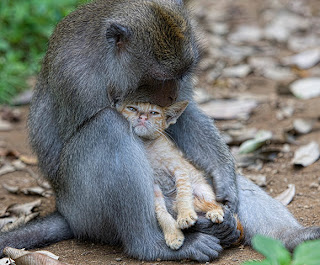 Here He introduced his Godson to his peer. 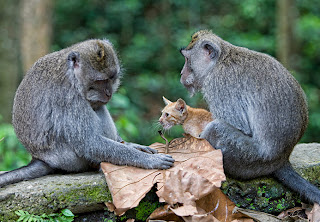 Now what does this Monkey wants out of the Cat? Well, let the Cat out, will Ya?

So remember in Life, do not snicker if you see an unlikely pair together as you are not in this position to Judge. Instead marvel at the intricacies of Fate or whatever.

Okay, lets get back to Feng Shui, with the so many types of school teaching Feng Shui, are still you Lost and clueless what is actually Real Feng Shui? There are at the moment for Feng Shui: Xuan Kong Flying Stars, Xuan Kong Da Gua, Xuan Kong Liu Fa, Yang Zhai San Yao, etc... Now the latest rage appears to be Landforms feng Shui for Ying Zhai Feng shui or you can simply put it as Burial for the Dead to ensure Health and Prosperity for the Living. And better still, the technique of being 'buried' while you are Alive, a Mao Shan sect technique that is now also refined into so called Feng Shui Secret.

It would have costs a Fortune to probably go through all of the school as all of them claims to be the only legitimate one and ultimately you might find that it still does not works in your life? I think some of you would probably have been already been feeling the frustrations after only one or two inductions into Metaphysics, right? Some after spending thousands on destiny analysis and finding that you still don't know what the heck hit you that day, a messy divorce, told to pack up and leave your job which you have been trying to protect by learning Metaphysics. Nope, I am not here to criticize or judge as I have said before, I am not that holy, Nah,just an opinion. But Ah ha, don't ask me what I think is the Real one?

I would just like to comment that with all this hula bula into Landform Feng Shui, why the heck did nobody put efforts into refining this geographical art as to predicting when the next earthquake disasters or tsunami disasters will happens as this geographical art is supposed to be able to sustain a family to last for three generations or about average of 60 years X 3 = 180 years. This is sure a merit as you can save thousands of lives as with Liao Fan' s Lesson. Or is it the same old excuse given time and time again, 'Heaven 's Secret cannot be Revealed'.天機不可泄漏.

Now look here, I' m not asking anybody to Play God or Nope, I' m not challenging Heaven's will here but if that is what Heavens want, Ok...

Let me share a interesting lesson in Life that I got recently when I come back again the next few days,

Meanwhile, a song, Dreams on with Nice Landforms...