Why was astrology invented?

So that economics could be an accurate science. 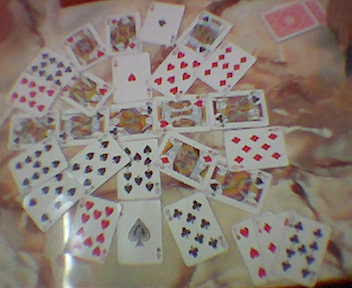 Back to Poker cards divinations.

This Bagua then refer to the eight areas or palaces of your life. Let’s look at it as the eight main directions with North, Ten of Spade at the bottom which is for Affinity, 人缘, then clockwise to North East which is Eight of Spade for Children palace, then clockwise to East, the card of King of Clubs which is for Career. South East, the Queen of Hearts will then be for areas relating to Business or Partnership. The Ace of Hearts which is the South, the top card in the inner circle which is for all Relationships. It is not the same meanings for Affinity. The Next Card, Eight of Hearts is then for Family matters referring to wife, siblings, parents and so forth. The King of Hearts which would be the West as in the Bagua would then be for Wealth Luck. And the King of Diamonds which is then for North West will be for areas related to Personal Health and Virtue.

On the arrangement of the outer circle of cards and fengshui, next episode.