The Way of the Dragon 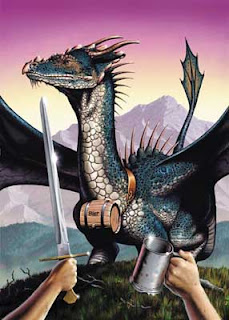 The above chinese words can also be read as The Return of the Dragon too. It was the title of a famous movie by the late kung fu actor, Bruce Lee, a blockbuster. Obviously, most of his movies uses the name of the Dragon or he was fascinated by it apart from his name which means Little Dragon.

Okay, due to a email question from my persistent chinese ethusisast about the above words today, I decided to give you a  reply and edit my post now, Argggh....

Hey, come on X, you dun expect me to write everything down right as it is the Chinese Whispers. This is a hidden meanings which you manage to grasp, my congratulations as it refers to the Tai Chi Tu or Ba Gua where the number 5 is Void as the Bagua have 8 number only. In Xuan Kong Da Gua, it would means the Dragon crossing from The Upper Era to the Lower Era, Got it?

My apologies, as you can see above, I have delete all the mails except your which I happened to read first and the reason why I have disable the comments for my blog. My further apologies to all as it is Seasons holidays, I would not be replying to any questions but no worry, there are still a lot of experts around elsewhere on the Net, please forward your enquiries to them. :  )

I will be BACK next Year!!!

Okay, Tea break over......
Some Heavy Stuffs today, as I have said before, if you happens to come on by here, please have some basic metaphysics knowledge, if not, please get out to avoid wasting your time reading about my crappings.

Interestingly, in Feng Shui, we have an important old classic line about this elusive Dragon by the Grandmaster Yang Yun Song,  先看金龍動不動，次察血脈認來龍, meaning See whether the Golden Dragon moves or not, verify the veins for the real Dragon.

Now why this Dragon is called Gold and not by some other names such as Water, Wood, Fire and Earth of the five elements of Chinese metaphysics. A Flying Stars Feng Shui practitioner must know this to know the essence of the Flying Stars for Feng Shui.


Part of the above chinese article is taken from a Chinese Feng Shui master in showing a case study on Master Tan Yang Wu who popularise the Xuan Kong Liu Fa 玄空六法 and gave up on the popular Flying Stars technique and wrote the book 玄空本义 after learning it from a Taoist Master Lee Qian Xu in the summer of 1929 and denounce Shen Zu Reng' s Flying Stars Feng Shui which then opens another new dimensions for metaphysics lovers. Here the writer explains his findings that in 1948, after Master Tan Yang Wu relocated his ancestral Ying Feng Shui  based on Two Era, Eight periods of Time in Xuan Kong Liu Fa for the Fourth period in the eighteen years of the Dui Trigram using this method. This was done during World War 2 and to be able to do it, the family must be well-off or wealthy. However, sadly as the writer who have taken the trouble to research and check on Master Tan Yang Wu' s audit of the newer Ancestral tomb and see the consequences that the late master's descendants have completely disappeared which contradicts the Liu Fa techniques that Master Tan have advocated and he had hoped that any of the present late master's descendants who come across his article can verify with him on their fortunes.

Now I am not here to critisize on different schools of thought, just that I find it amusing. It is with interest that I am writing about this is because this event happens during Age 5 for Flying Stars Fengshui in 1948. Shen Zu Reng' s Flying stars techniques uses the San Yuan Nine Yun or Three Era, Nine Periods of 20 years to measure time. Now most of you knows that for Age 8 now, sector Gen Gua Star 8 is the Zheng Sheng 正神, the Ruling Star for the period and the opposite sector Kun Gua Star 2 where star 5 the Dragon is the Ling Sheng 零神. Ling Sheng means Void sector which wants to be filled up with Yang energy so the saying that it is good to have water or activities in that sector. So in Age 5 where Star 5 The Dragon did not go Missing but Return to the centre of the Luo Shu Square, some present day masters advocate Star 4 as the Zheng Sheng, the Ruling Star and Star 6 as the Ling Shen for the first ten years and vice versa for the second ten years in their teachings. Another school of thoughts advocates using Star 2 as the Ruling Star for Zheng Sheng and Star 8 for Ling Sheng for the first ten years and vice versa for the next ten years of the 20 years period. So who is right or wrong? That is to say that either Star 2, 8, or 4 and 6 would have extra 10 years each, doesn't it sound not so perfect for measuring time? And interestingly, the Water star 5 in the birth chart of the property cannot have water but the Star 5 in the age of the Ruling star in the Luo Shu Square must have water or Yang energy for Flying star or Liu Fa (The Golden Dragon for Liu Fa is in the North East or Gen Gua for this period which is the difference for the two schools of thought). If you can understand this, you would have taken another step forward to understanding Flying Stars.

Now for Xuan Kong Liu Fa, the above chinese writer have already mentioned that in 1948, Master Tan Yang Wu who knows part of the Shen' s flying stars technique is most likely to have use the Trigram school of measuring time using the yaos and relocated his family ancestral tomb, yet accordingly have bear no fruits for his descendants. If the time measurement is incorrect, it would also means the date selection for the new location of the ancestral tomb would also be wrong. The positioning of the Tomb would also have to be timely.The above writer stated that he is keen to locate anyone related to Master Tan Yang Wu to verify his findings.

Now, now, don't panic, for those of you using Flying stars technique, it is still safe as Age 5 would still be at least another 100 years away. But if you would like to have great great grand children enjoying great fortune 100 years later, could help to do some research or find out from those who know. Actually the answer is in the meaning of the Golden Dragon or Star 5. It would also helps in understanding on how to Fly with the Stars. : )

Seasons Greetings to all who happens to pass by here.