My apologies to my faithful readers here, though the story might looks like having missing parts on the Xuan Kong used but I do not want to waste anymore of your precious time in further full translations but nevetheless I hope that all of you here would still enjoyed the ending. Cheers. 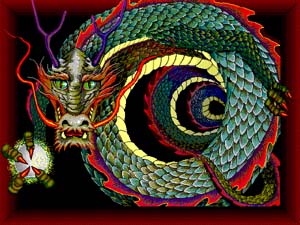 One year later, Ah Tong had then followed Old Master Jiang instructions after meeting him at the tea house in Tai O fishing village. He then shifted to another residence as well as moving his office to another location. Old Jiang on seeing the two properties then told Ah Tong with a smile: 'From now on, both of you would be a very happy couple.'  He heard him telling Xiao Wu :'夫唱婦随啊... '

Ah Tong was then puzzled on this prose as Miss Han was still very cold towards him despite his efforts in showing his sincerity to win her back since she had recovered. It was not unusual as she is a proud woman and Ah Tong was also worried that he would be rejected if he approached her for a reconciliation.

One night when Hong Kong was hit by a typhoon, there was a loud crash and a scream which awoke Ah Tong. It came from the children's bedroom and Ah Tong rushed to see what happened. Amidst the lightnings and thunder sounds, he saw a shivering figure huddled at a corner which was Miss Han, he went to her and heard her sobbing :'Please hug me, I am very frightened.'

And as in a fairy tale, they then lived happily together and thereafter despite Xiao Wu's grim forecast of Ah Tong undergoing unfavorable marriage luck for the next few years in his bazi chart.

The universe is full of magical things, patiently waiting for us to unlock the chains of life that bounds us from it....