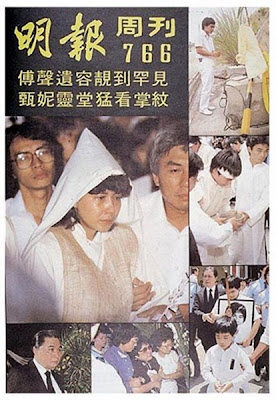 Being bored,to entertain myself, let's look at a case study of the above actor on what could be the reasons for his sudden demise with no obvious danger from clashs on his bazi for that year, month and day of his death.

Alexander was born as Cheung Fu-Sheng in 20 October 1954 in Hong Kong, the son of a wealthy New Territories indigenous inhabitant businessman. His youth was characterized by his quick temper, disinterest in school, and fighting in the streets. As a child, his family lived in Hawaii for a few years and there he began training in judo and karate.(Based on his birthdate, with the missing hour pillar, I hereby concluded that he is a strong Earth Ji己 Daymaster based on the history from his early ten year luck pillars, of course subject to objection, ha-ha... you would have to plot the bazi yourself )

In 1971, he enrolled at Shaw Brothers Southern Drama School and instantly drew the attention of director Cheung Cheh. Cheh had Fu Sheng train with Lau Kar-leung for 6 months. Fu Sheng made his film debut as an extra in the 1972 film The Fourteen Amazons. His first lead role was in Cheh's Police Force. With his good looks and mischievous charm, he quickly became a major star for the Shaw Brothers studio.

(He went into ten year pillar of 16-20, Bing丙,unfavorable element unless he has a Xin Metal辛 at his Hour pillar, 21-25, Zi子, favorable element which support the two Jia甲 at the Heavenly stems at Month and Year of his bazi which is for status and power)

A series of injuries in 1978 & 1979 (known as 'Black September' in the media) forced Fu Sheng's career to slow down considerably. His first serious injury came on the set of The Deadly Breaking Sword when a wire suspending him snapped and he fell eight feet landing on his head. While working on Heroes Shed No Tears, he shattered bones in his right leg. (His Ten year pillar just went into Ding丁 Chou丑 chinese age at in 1979, 26-35, unfavorable elements)

Fu Sheng was supposed to star in Snake in the Eagle's Shadow but was refused by Run Run Shaw; head of the Shaw Brothers Studio. Jackie Chan was eventually cast in the role and the movie was a big hit. Fu Sheng worked hard to recover and although he never fully regained his previous abilities, he recovered enough to resume his martial arts film career.

The song lyrics in Cantonese (a chinese dialect) sung by his wife to support him, in this bleak period in 1978, the coming of his unfavorable element of Ding丁, the Heavenly Stem for Fu Sheng Bazi. Can u feel her Love energy or Sheng Qi in this song?

Fu Sheng bought and lived in the late Bruce Lee's house in Kowloon. On 7 July 1983, he was returning home from a dinner engagement at the Clear Water Bay Golf Club. His Porsche 911 Targa, driven by his brother, took the curves of Clear Water Bay Road too fast and crashed into a cement wall. Fu Sheng was rushed to the hospital with serious injuries and died three hours later widowing Cantopop star Jenny Tseng with no children. He was 29. He died almost exactly 10 years after Lee had died on 20 July 1973. At the time, he was filming Invincible Pole Fighter in which he was to be the hero. In the finished film, Fu Sheng's character abruptly disappears and the focus was put on co-star Gordon Liu's character. His funeral was organised by the Shaw Brothers committee which was heavily attended and was compared to that of Bruce Lee.[2]

Hmm, does it remind you of the unfinished movie by actor Bruce Lee, 'The Game of Death'.

He is not as well known in the U.S. as other Hong Kong martial arts film stars due to his short life and limited availability of his films. But he has a strong cult following among genre fans. Fu Sheng's old makeup cubicle at the Shaw Brothers studio features a shrine constructed to appease his ghost, which is said to haunt the backlot.

(Suprisingly the year Bruce Lee passed away was a Gui Chou Year. He was a weak Wood daymaster Jia 甲. His Hour pillar was Wu 戊 try to combine with Gui癸 for Fire. In this case, the year 1983 was a Gui Hai Year. The Month was a Wu Wu Month. The day was a Bing Shen day.(Apart from the clash of the year Gui on the Ten year luck pillar of Ding which don't look serious, though for Shen Sha in Bazi, the year Hai is the mourning star and solitary star for the spouse palace earth branch You酉. We can also says that his death was caused by the brother which in ten god relationship is earth which is a unfavorable element for a Strong Earth Daymaster.)

I, however would look at it this way, there is a rule for people born in Earth or Tomb Month, in this case the month earthly branch, was Xu戌 the storage for Ding丁 Fire which appears in the ten year luck pillar in actor Fu Sheng Bazi. The rule is that if the element for that earth appear in the Heavenly Stem in ten year pillars or yearly pillars, one would have to be very careful in his activities. For Fu Sheng, his birth month was Xu Earth, the storage for Ding Fire. In case you are lost, I' m refering to e.g. for Chou Month, Heavenly stem Xin Metal would be the element, Wei Month would be for the Heavenly stem Yi Wood.)

A guy bought his wife a beautiful diamond ring for Christmas.

After hearing about this extravagant gift, a friend of his said, "I thought she wanted one of those sporty four-wheel-drive vehicles."

"She did," he replied. "But where was I going to find a fake Jeep?"