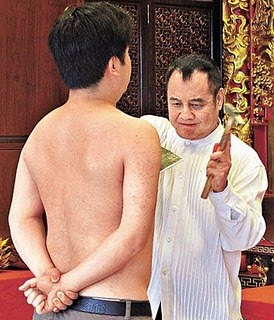 Here is one photograph taken from Mr. Joseph Yu blog of the success that Mr. Szeto reaps after the court case of the Nina Wong Billions on a ritual he conducts for the new Chinese year of the Tiger where 100 people paid HK$8800 each to him. You all can go to his blog to read further.

It is with interest that after the court case where Mr. Szeto, Fengshui cum Taoist master for the plantiff won not because of his taoism expertise but on the basis that the judge rules that the will is a forgery. It is probably that people have forgotten that before the trial starts, the irony that the signature or handwriting expert that Mr.Tony Chan personally nominated for the case had already gone against his favour stating that the will is a forgery. The success of the part Mr. Szeto played was in making the Judge look at the rituals with distaste of a Mr. Tony Chan, also a Mao Shan practioner, preying on a sick and desperate woman and concluding that there are doubts to the integrity in the character of Mr. Tony Chan, another factor in ruling against him on the origins of the will.


Anyway, this is one ritual taken from Taoist Wilson Yong, 5 Ghosts Carry Wealth.

‘In Feng Shui some of you may have heard of it, "The Five Ghosts Transportation Wealth Technique" it's actually a Feng Shui secret technique to enhance your wealth and good fortune. Most Feng Shui practitioners know how to use these theories to enhance their wealth.

Next a set of rituals need to be perform, practitioners need to follow all procedures and must have the perseverance to practice it consistently for 49 days. If any of the steps in the procedures are omitted you will need to restart the entire rituals again. It may seems very tedious but the rewards gained after the 49 days rituals is very lucrative and rewarding.

An altar is set up as in the illustration below, the Five Ghosts are drawn on a piece of white paper and then placed on the altar on five bowl of uncooked rice as in the arrangement above. The practitioner then cut some finger nails (male left hand & female right hand); place it in the 5 bowl of rice directly on top. Some hairs from the practitioner head is also place into the five bowl of rice. And lastly the practitioner needs to write his date of birth and hour of birth on 5 small piece of red paper. Each paper is then placed into the 5 bowl of uncooked rice. 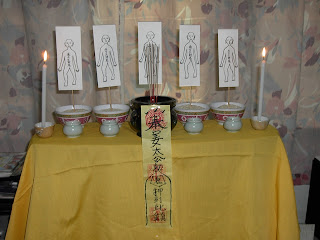 Meats are to be offered daily at night after 11.00pm consists of duck, chicken, pork, fish and wine. A pair of white candle is only lighted when the offering are made. Prepare a set of Joss paper that consists of the gold ingots and silver ingots. Light 5 incense and place it into an incense censer. Make sure the incense censer had one piece of the talisman stuck there; this is to control or protect the altar. Next form the mudra and chant the mantra, state your wish and then burn the sets of joss paper. Finally pour the 5 cup of wine on top of the burned remains of the joss paper. You have then completed the rituals; one needs to consistently practice it for 49 days.

And on the last day of the 49th night put all the 5 paper effigy into a basin together with the joss paper, take out your finger nails, hairs and the paper with your date of birth and time. Then burn everything together. Once you have done this the 5 Ghosts would be able to assists you for the rest of your life, as they are now merged or attached to you.

And lastly write your name, date of birth, time of birth and address on the talisman above, then stick this talisman above your main entrance. This would enable the Five Ghosts to identify your home and then consistently transfer wealth to you.

Remember to offer the set of Joss paper every month on the 2nd day and the 16th day of the Chinese lunar calendar. This is the Five Ghosts Payroll day! This will keep them working for you!’

I will come back again on Flying with the Stars II later.