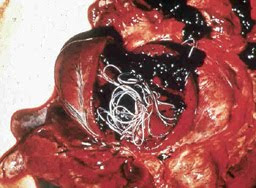 As the lunar seventh month is approaching, so called the Ghost Festival Months where you will see some Chinese people burning incense paper and give offerings to the spirits or ghost, let me share a story. Many months ago this time, I happened to do an Yi Jing Divinations for a young boy and I got this divination of Hexagram 18 Gu or Decay.Now this Hexagram 18 Decay蠱 in the Yi Jing, the word is also associated with a black magic spell using worms to cause death and to acquire wealth apart as a love spell too. As the hexagram had implied, decay from within however though inasuspicious, with this warning one can be cautious and take action as with the ying and the yang. The interesting thing was that I know this young boy` s father who had for no rhyme or reason commited suicide out of the blue and I was probably thinking of this when I was doing this divination and the Yi Jing as usual had rebuked me by giving me this Hexagram. At that time of before his death, it was rumoured that he had got to know a Mao Shan practitioner and had behaved strangely. Interestingly, Richard Wilhelm (1967:75) translates "Setting right what has been spoiled by the father" for this hexagram."The Judgment" (tr. Wilhelm 1967:75): "WORK ON WHAT HAS BEEN SPOILED＂ has supreme success.

This bought to mind this black magic spell which though have no relations to the Ghost month but nevertheless thought I would like to share with you people here to spook you up for the coming month, ha-ha, me BAD.

The word蠱 also means insanity shows three worms虫in a bowl皿.This spell originates from the Miao tribe from Yunnan, China. Those black magic stuffs you see in Movies associated with Thai master also originates from the Miao tribe as they are just at the Border of Laos. It is believed that those Thai Black magic masters have links with Laos where the remnants of the Miao Tribe are now in.

Anyway this black magic spell was a venom-based poison associated with cultures of south China, particularly Nanyue. The traditional preparation of Gu poison involved sealing several venomous creatures (e.g., centipede, snake, scorpion) into a closed utensil, where they devoured one another and allegedly concentrated their toxins into a single survivor. Gu was used in black magic practices such as manipulating sexual partners, creating malignant diseases, and causing death. It is believed that the remaining survivor is then grounded into a white powder substances and then put into foods or drinks of the victims. It is believed that the body would then creates this worms out of the substances taken from the victim, ever see maggots from nowhere coming out from a dead decomposed body.There are different types of Ku depending on the insects or creatures used. The most lethal type is believed to be of blood spell 金蠶. gold silkworm spell. These gold silk worms are believed to be parasites from a special tree found only in the vicinity of this tribes, it cannot be killed and mutiply rapidly once awaken. These worms spent most of their time sleeping and once awaken would start eating into the host, the tree non-stop and go back to sleep. The word pronouced as Ku or Gu 蠶also sounds like the meaning of a drum. This worms are captured by the witch doctor and put into a covered bowl and then allowed to sleep. The witch doctor would then use a special drum to sound and awaken the worms after which the worms would eat each other as there is nothing else to eat apart from some dead poisonous toads or other insects added into the bowl.The remaining surviving one would then be ground into powder for uses on intended victims. This particular worms are believed to be invulnerable to any kind of Poisons or Heat or Cold and cannot be destroyed. Once assimilated by the victim, the witchdoctor would activate it by hitting the drum which the original worms were subjected to before being turned into powder potion and it is believed that this drum make from special skins would hit a certain frequency that even if you are on the other side of the world, the worms virus would then recreate itself from the powder assimilated by the victims and start to eat into the organs of the victims until death releases the victims from the gnawing pains. Ever heard of `Energy cannot be destroyed right? It would just change to another Form.`

Believe it or not, I leave it to you readers but don`t panic there is a remedy for it. In pharmaceutical literature, drugs of a plant, animal or mineral origin were described as effective against ku poisoning. The Buddhists recommended prayers and conjurations, thus utilizing the same methods as practitioners of demonic medicine. Adherents of homeopathic magic recommended the taking of centipedes, since it was known that centipedes consume worms.

So I hope that you people would not think that being a Feng Shui Master is very glamorous or lucrative as you would be meeting stuffs like that, : (

Arrrggh，its midnight here, I am going to bed.