Who should be responsible? 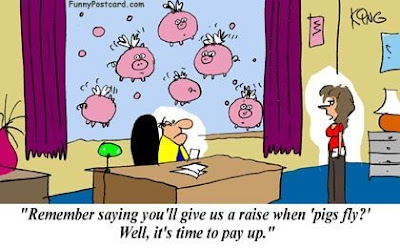 There was an engineer, manager, programmer and a driver, going down a steep mountain road.

The brakes failed and the car careened down the road out of control.

Half way down, the driver managed to stop the car by running it against the embankment narrowing avoiding going over a cliff.

They all got out, shaken by their narrow escape from death, but otherwise unharmed.

The manager said "To fix this problem we need to organize a committee, have meetings, and through a process of continuous improvement, develop a solution."

The engineer said "No that would take too long, and besides that method never worked before. I have my trusty pen knife here and will take apart the brake system, isolate the problem and correct it."

The programmer said "I think you're both wrong! I think we should all push the car back up the hill, drive down and see if it happens again."

Some quotes about perceptions,

“If people from Poland are called "Poles," why aren't people from Holland called "Holes?"

"I am" is reportedly the shortest sentence in the English language. Could it be that "I Do," is the longest sentence?

Ha-ha, nah, I’ m not changing my blog theme on metaphysics.. Just to protect myself from negative vibes with some humour, copied elsewhere, where else?

Anyway, about what we can learn from dogs (also copied, ha-ha), to end the day.

If a dog were your teacher you would learn stuff like...

- When loved ones come home, always run to greet them.

- Never pass up the opportunity to go for a joyride.

- Allow the experience of fresh air and the wind in your face to be pure ecstasy.

- When it's in your best interest -- practice obedience.

- Let others know when they've invaded your territory.

- Take naps and stretch before rising.

- Thrive on attention and let people touch you.

- Avoid biting, when a simple growl will do.

- On warm days, stop to lie on your back on the grass.

- On hot days, drink lots of water and lay under a shady tree.

- When you're happy, dance around and wag your entire body.

- No matter how often you're scolded, don't buy into the guilt thing and pout... run right back and make friends.

- Delight in the simple joy of a long walk.

- Eat with gusto and enthusiasm. Stop when you have had enough.

- Never pretend to be something you're not.

- If what you want lies buried, dig until you find it.

- When someone is having a bad day, be silent, sit close by and nuzzle them gently.