Something to pass your time here from a Singapore Government Ministry, no, I've not gone commercialized or into politics.

Yap, I'm getting bored with metaphysics, however I will be BACK.

Wonder whether it will be removed again by copyrights again...Ha-ha.....

For those who are local and have seen this advertisement.

The Ritz Carlton is a Six Star Hotel in Singapore's bay area. A peripheral view elucidate the presence of octagonal shaped windows with the whole of the lower portion of this building elevated high up into the air. Beneath thus exists a gigantic spherical air well with its inner frontage together with both the dragon and tiger barricades displaying design eminence.

In view of the many buildings sighted by the author during various visits to Europe, America, Asia and the Middle East, windows adopting the Ba Gua shape is indeed a vacuity. Ritz Carlton is indeed avant garde to use this conception. From the point of feng shui the Ba Gua is used for the elimination of Shar from outer formation. However, care must be taken because it also encourages disharmony and lawsuit thus its placement must be that of due care to prevent environmental disharmony.

Just adjacent to one side of the hotel is a diagonal eight lane highway. With the high speed of the traveling vehicles and the proximity of this bridge, the impact of its Shar is ominous. Certain geomancers will use 'Ba Gua mirrors' to intermit this Shar, whereas for the Ritz Carlton, the octagonal shaped windows employed resemble thousands of hundreds of Ba Gua mirrors on the hotel's exterior. 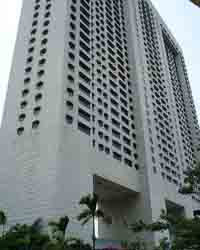 The hotel's main entrance is that of a large circular tunnel totally consummating its basement. Thus in feng shui study is the 'hauling of water across the hall' i.e. water in the exterior frontage is lug in for self usage, thus the incessant incoming wealth.

Most buildings adopt a solid base to depict stability, credibility and the hailing of abettor. However for both the Ritz Carlton and the Hong Kong's Hong Kong & Shanghai Bank Corporation headquarters the base of the building are thoroughly lifted. The adaptation to and recreation of new environment of modern architecture in semblance to the requirement of olden days lair formation - begets the benign and expel the baleful. 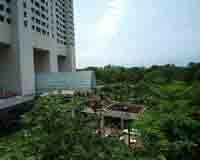 Due to proximity of the highway, the whole hotel has been up rooted skyward of about five storeys to completely the Shar radiated, a measure in addition to the use of reflective mirrors.

The highway, originally the hotel's 'bridge star' is converted into its 'incoming water' by this elevation - an exquisite display of Xuan Kong's 'Mountain & Water concerto'. The classic states: 'The embodiment of wind requires water, presence of both, the hoarding of chi.' 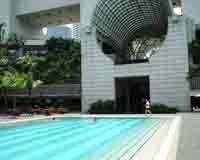 Frontiers can be subdivided into both external and internal, the requirements being outer frontier must be huge - the Marina Bay, whilst the inner frontier small - the hotel's swimming pool.

With the presence of water in both its frontiers together with its refined apparition, this is an undefeatable lair lasting for 180 years (throughout the three Cycles). A semi circular car porch further dictates the dragon & tiger barricades thus the entrapment of the inner frontage chi and its preservation.

The Problem with Life is thare are no background music.'
Posted by 李杰 at 8:13 PM