Remember way back I had posted an article about The Living Hell on Earth. http://wwwleegiat.blogspot.com/2009/03/geography-or-geomancers.html 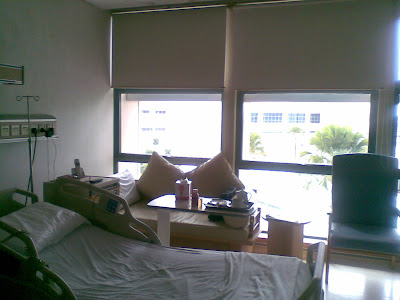 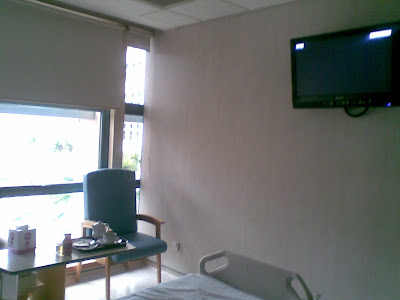 Well, finally I was there and back. It has 24 hours room service. A concierge to take your food order with a very nice menu, choices of western or oriental. Two tea breaks, one at 10.00 am and the others at 3.00 pm apart from the three meals a day. You sure would gain weight.

Ha-ha, as some people are fond of using this to quote Buddha: ‘If I don’t go down to Hell, who would?’ Sure, I book a class ‘A’ single ward, look at the pictures, doesn’t it looks like a 5 star hotel room. The bed can be electrically operated for various positions. 24 hour TV with SCV cable channel. Nice view. Pretty nurses, boy, I was surprised. Well, they said with Wealth, you can have Health, now I will think twice about it.

Well, I was cut up, they called it Open Surgery. I couldn’t sleep the whole night before the operation; just as well, I was on the verge of panic, wondering if I will gain consciousness halfway and feel them cutting me up. I got knock out after they put the anaesthesia on me and I woke up pleasantly with surprise, two tubes coming out of body to drain excess waste fluid from the body, yuck. Then I heard moaning sound next to me, it was from a old lady who had an operation too. It sure adds to the new eerie atmosphere I am in, never had an operation before. I was in a so called High Dependency ward where they monitored you for any sudden critical changes after the operation for 1 or two day before they would send you back to your ward. 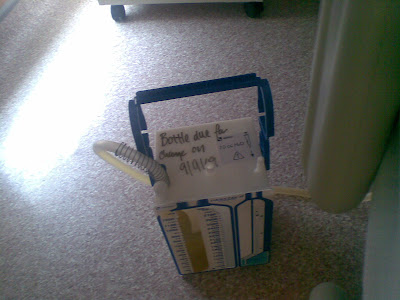 Boy, I sure had a hard time for two weeks with the tube sticking out of my body attached to a car battery look-alike container and I couldn’t move around. Before I had given the go ahead for the operation, the doctor had told me it’s a simple 1 day operation and I would be back on my feet in no time.

Argh, found out after that I would be stuck there with the stupid tube and the battery for 2 weeks. It sure was painful with the tube stuck into my chest; they call it a chest tube. While I was in the high dependency ward for that night, heard a commotion at a neighbouring ward followed by frenzy movements of nurses and doctors. Somebody must have got into trouble, kept me awake the whole night.

It sure gives me a different perspective of the world now with me as I sit here, grateful that I had got out of Hell. When I was watching medical hospital drama in the past on TV, I couldn’t feel empathy or connected; now I sure do, Man.

Anyway, the reason I’ m sharing this is because I would also like to clarify the Flying Stars theory works. A similar case like mine happens to a friend was diagnosed with cancer and he passed away in a time frame of two years. Considered not bad as the doctors had given him actually 6 months to live. I was fortunate that I know metaphysics and that I had seen this coming as I was having a Fu Yin in my Ten years pillar in my Bazi. I had then coincidentally shifted into a house with a main door that has star 2 and 5, deadly combinations for cancer, the worse scenarios (Surprise, that’s how destiny works). Using the flying stars knowledge that I have, I was able to to get a more positive outcome. It tested negative for cancer but most cases like mine could still turn cancerous anytime. I was fortunate that I am able to use flying stars theory to neutralise it as well as the knowledge of Yi Jing. In the recent gathering for Fivearts Forum members, I had shown my scars from the operation to some of them so rest assured that I’ m not Bullshitting you. I will be back later to clear some misconceptions about flying stars and hopefully, that it will helps in your understanding of the stars.

I would have like to share more but as there are some sceptics out there who had discarded the flying stars theory as in this example, a quote from a website: ‘We will explain the premises of why pseudo Feng Shui such as Xuan Kong Flying Star and BaZhai (8 Mansion) can’t work as Feng Shui.’.

Well, well, so be it. Unless of course, there happens to be a secret manual passed down since the Shang Dynasty or Master Jiang Da Hong in these few thousands of years,and which no one have heard of. Anyway, I have nothing against anybody. Its just that why don’t we do it as in my case as a guinea pig in flying stars research without offending anybody e.g.: ‘ I have discovered certain techniques in the flying stars theory that have not been mentioned by any known masters alive or they want to keep it a secret and which I believed that even Master Tan’ Yang Wu would not have switch to Liu Fa Fengshui if he had known.’, ha-ha…..

Interestingly, a fellow fengshui enthusiast, Fscrazee as he is known in the fivearts. Forum or Master Hung Hin Cheong, the author of the book ‘Zi Bai Purple White Flying Stars Script.’ had more or less concluded that as in his quote: ‘It is also gratifying to note that XKDG is increasingly, and justifiably, being attributed to Zhang Xin Yan and not Jiang Da Hong. That makes it not much older than Shen Zhu Reng's XKFX. Both are 'new kids in the block' in fengshui history.’

Will be back with,

Flying With The Stars,