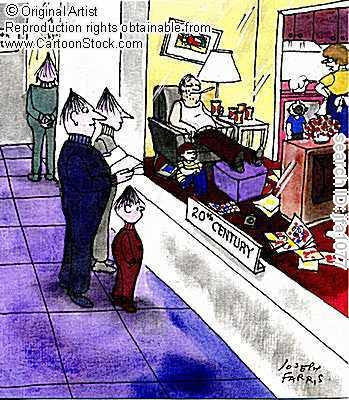 A boy was assigned a paper on childbirth and asked his mother, "How was I born?"

"Well honey..." said the slightly prudish mother, "the stork brought you to us."

"Oh, the stork brought us too."

"Well how were grandpa and grandma born?" the boy persisted.

"Well darling, the stork brought them too!" said the mother, by now starting to squirm a little.

Several days later, the boy handed in his paper to the teacher who read with confusion the opening sentence: "This report has been very difficult to write due to the fact that there hasn't been a natural childbirth in my family for three generations."

A posting by kv_Yang from one of my yahoo groups, [Traditional Feng Shui]

'From the reading of GPS on the Dragon's Xue Spot, we are not only given the Degrees of Luopan for us to audit fengshui, but also the reading for us to check on the Google Earth to help us improve and confirm the auspiciousness of a Fengshui Formation. The Google Map shown on the left quoted from www.mqfengshuiacade my.com, we can clearly see the Ancestor Mountain comes from the Xun (Sheng Wang) direction originates from Xun Mountain on the left, its in-coming Dragon all the way from the Ancestor Mountain (Shao Jun Shan) to the Head of Dragon (Ru Shou Long) via the Parents Mountain (Fu Mu Shan) clearly indicated by its "Long Mai", the Dragon Vain of the In-coming Dragon as shown on the Google Earth Map extracted.

From the In-coming Dragon shown on the Google Earth Map, there are two Waters follow Dragons coming down from the Valley -- with the Ding Water (Wife) follows Geng Dragon (Husband) from the Valley on the right, left-turning Yang Water as Chang Sheng Xun Si Water and right-turning Yin Water as Geng You Di Wang Water from the left Valley which drains down water from a Reservoir (Water Dam as shown from the Google Earth Map) on the Geng You Sector. So, with the help of GPS and Google Earth, it makes our fengshui audit scientific and much easier to walk the Dragon to come the following conclusions: - 1) It is a Sheng Wang Dragon
2) It is a Real Dragon and Real Dragon Xue
3) The Dragon Qi is Yin Yang Balanced, i.e Geng Dragon gets accomplied by its Wife, Ding Water follows Dragon.
4) A perfect FS JU of Internal Qi: "To Nui Na Geng Ting Zhi Qi"
5) A perfect Fengshui Formation of External Qi: "Xun Geng Gui, all are Wu Qu Positions"

The chosen piece of land to build a Yin (House) Zhai requested by our Clients, the Xue Seating of the Yin House on the "Long Jing Qi Zhong" of a Hill slopes like a Head of Turtle, the whole piece of Hill is just like a Turtle comes up after the Ru Shou Long of the Host Dragon. So, it¡¯s a very ideal place to build a Yin Zhai because the In-coming Dragon is a Sheng Wang Dragon from the Xun direction, the Ming Tang infront of the Xue Spot is very flat, broad and wide as a Flat-landed Dragon all the way to the sea with High-landed Dragon at the back where the proposed Yin (House) Zhai recieves good ranges of Mountains at the back of Xuan Wu Fang from auspicious sectors of Yang, Chang Sheng, Guan Tai, Lin Guan and Di Wang Mountains. It is a perfect Fengshui Formation of "Xun Geng Gui, all are Wu Qu Positions" and "To Nui Na Geng Ting Zhi Qi" where the Host Metal Geng Dragon coming in all the way from Sheng Wang Position as "Long Zhen Xue De" (Real Dragon and Real Xue) marries with its Wife Ding Water follows Dragons as Chang Sheng Water, Yin Yang Internally Married to produce auspicious and strong Internal Dragon Qi and Yang Water of Chang Sheng Water externally marries with Yin Di Wang Water right-turning, going out to Mu Storage to accumulate auspicious External Chang Sheng and Di Wang Water Qi and Yang, Chang Sheng, Guan Tai, Lin Guan and Di Wang Mountains External Qi in the Ming Tang to effect the Internal Qi to produce auspicious results of having many descendents, promotions, wealths and good health for the descendants of the Yin (House) Zhai, the auspiciousness will last for many hundreds and thousands years because the Internal Dragon Qi is very strong and so long the Mountains and Waters do not change their positions as shown on the Google Earth Map. Since it is a perfect fengshui formation of a Yin Zhai, thus the auspiciousness will be equal through-out all the members of the family.

Hope you enjoy our posting!

So what you think about learning Ying Zhai Fengshui in English? 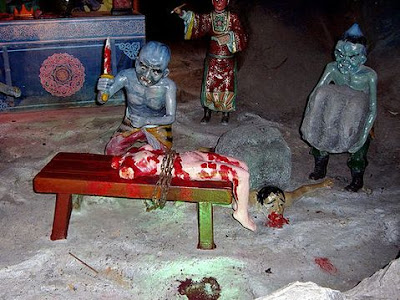 A casual conversation with Yi Jing after a chat with my mentor, Mr. Vincent Koh.

Mentor: ‘It is interesting that sometimes when I am in the vicinity of hospitals, it reminds me of the living hell not unlike that of our Haw Par Villa (A tourist Icon in Singapore, the picture above) where the eighteen levels of Hades is portrayed.’

YJ: ‘Don’t you see a similarity of being cut up here and there as in Hell or go through sufferings in a hospital when we meet with a karmic debt to be paid?’

Me:’ Oh Master, we are now doing fine why suddenly you take over this topic’

YJ :’ No, It’s not that, it’s just that sometimes we take things for granted and complain about our unhappiness in life as we have not come to that stage. But then, what is unhappiness? Shouldn’t we be grateful that we are still in Heaven and that we should practise virtue as we are not unlike Heavenly Beings on Earth with a thought for those going thru that in life.’

Me: ‘Oh no, Master, I do not want to carry on this topic’

Me: ‘I don’t know whether I have any karmic debt? And I don’t like the idea of it if I should have one.’

YJ:’ Then you should face reality. Even if you have one, before the debt is being asked, you cultivate virtue as in causes and effects, you might instead find it pleasant when the time is up’

Me: ‘Mmm, let me think about it and we will carry on another fine day, Master’

Ha-ha, do you get it when the time is up?

Me, I will surely let you know, ha-ha, hah. One Fine Day.